Ode to a Countess 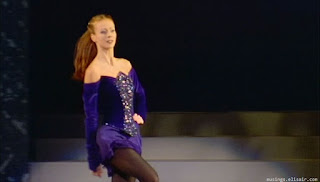 Pattern: Countess Cathleen by Síle Maureen (no link yet; this is my sample. As soon as I publish it, I will edit this)
Started: March 25, 2022
Finished: 2025? lol
Made for: Síle aka Me/ design sample/ also my Year 2 Divination project for Ilvermorny
Yarn: Briggs & Little Heritage (100% wool; 215yds/196m = 113g)
Gauge: in Moss stitch 22sts & 28 rows = 4"/10cm
Needle size: 5.0mm/ US 8
Hook size: 4.5mm/US 7 (used for provisional cast-on only)
Notes & Photos:
January 22: Setting this up and hopefully getting started soon. I made the decision to use the B&L H I bought a few years ago (to make Morning Ramble) to finally get my ode to Jean Butler, Riverdance, and the most iconic slip jig ever danced made. Plus I love the color and really want to wrap myself in the woolly fabulousness of it.
I knit a swatch last summer/fall and it reawakened my dream of this pattern: a hooded cloak with Star stitch edgings, a cable panel running all the way down the back, triangular Moss stitch sections separated by braid cables, and knotwork motifs based on the wide center panel at the bottom of each triangular section. All in a bright yummy blue. There will be i-cord/wooden toggle closures at the neck. Something warm and practical that could've been worn in the mists of time, in an enchanted, not quite real color. I digress!
I'll also be declaring this as my Yr 2 Divination project at Ilvermorny; Declaration can be found here: Wand-dancing
March 25: My charts are done other than the little tweeks I do as I knit. I'm figuring out the hood shaping today. I casted on 34sts (cable panel has 32sts; added one on each side for picking up sts along the edges), and have worked almost 4 reps of the row rep (16rows to a rep). I want roughly 10" before I start adding in the sides. My idea is to run the cable panel from the top of the hood, and right down the back to the hemline. Silly me used a size 4.5mm circular though *facepalm* But this also isn't the yarn I'm using for the actual sample. It'll give me a roughly good idea of how to shape (or not to shape) the hood. *(Side note for self: S is intrigued and would like to test the pattern when done)
Here's the hood swatch so far: 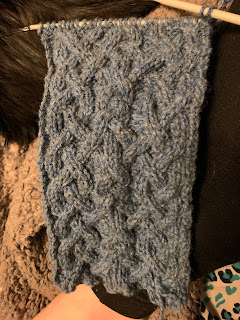 March 27: I think I have the hood shaping figured out. I think. I will continue knitting this mock up of it until I'm certain...
March 28: Had to tink back a bit as I didn't like how I picked up the sts on one side. Lol Yes, I am that picky! 😂
later: Ok, this is looking better now. This is the top of the hood, which seems a strange way to start but I'm thinking of it as a deeper bonnet-style with the cable panel "wrapping" the top and back of the head. 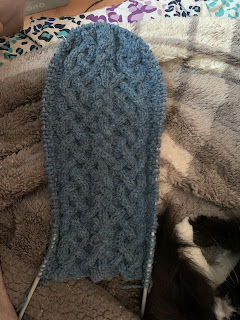 And a "happy Monday" Jakey toes and tail photobomb too :)
April 9: New photo of the hood swatch. It's starting to look like a hood from the side. 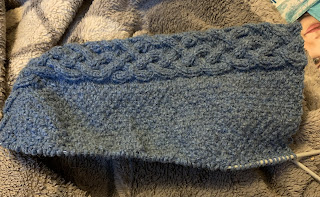 I've worked out how to combine the star st borders on the cloak body with the hood too. Even have a chart for it! I think the narrow border of star st will give it a nice polished look where the edges on the hood are a bit "rustic" right now... which could be a design element on another project/design!
April 15: It's time. I want to get the real deal on the needles. Winding the first hank into a ball and have some cotton yarn used as the provisional cast-on already. A photo for the momentous event: 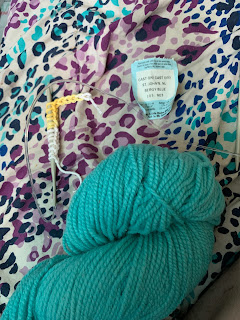 And now to wind the wool!
April 16: And the first section is done! I have the star st band started and can now pick up sts along the side for the cable panel. Once the cable panel is long enough then I'll pick up sts along the long sides and continue as I did with my swatch, but including the star st border as well. Three distinct textures in this: the star st squooshiness, the carved cables, and the nubbly moss st. I love it! Oh and the wool is absolutely perfect. Here's my bit of star st: 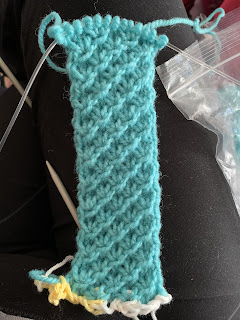 I need to put the sts from the star st on a bit of yarn to hold them for the time being.
April 17: First rep of the center cable panel is done! :) The top of my hood is coming along nicely: 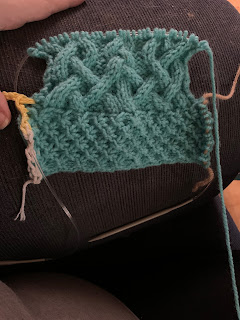 Onwards!
April 18: About halfway or a bit better to the point where I pickup the sts along the cable panel and continue the hood on all 3 sides: 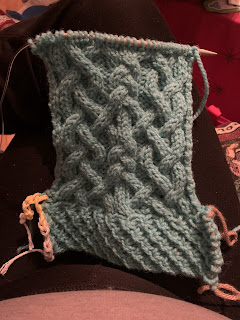 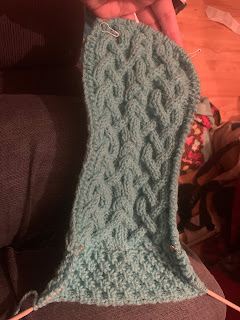 The cable on the circular needle is horrible. It doesn't want to straighten out at all. Hopefully the hood sts can wrangle it a bit, especially where the tight corners are until there are a few sets of inc's made.
I really like how the star st looks as the border. I think it's just different enough from the cable panel and the moss st both to make the cloak interesting but not fussy. At least I hope so!
April 19 (5:37pm NDT): Everything is going perfectly :) This sunlit photo of the work-in-progress looks way more blue than the wool really is; the photo of just the star st panel is the proper color 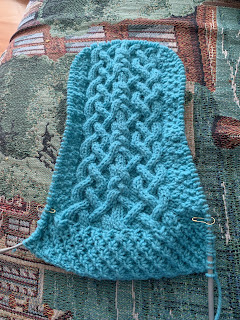 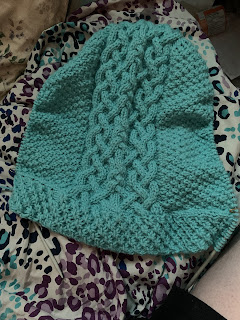 I like how the back is shaping up. I really wanted to avoid what I think of as "gnome head"; the point that most hoods seem have. It can be cute but in my opinion it has to be longer to look good, not just a point sticking up in the air. Especially on something being sized for teens and adults. My shaping has given a much nicer round back to the hood :) 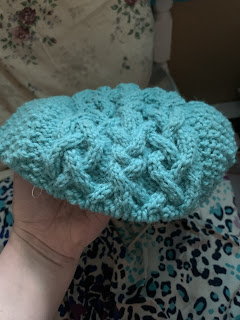 May 1 (2:57am NDT): Spent a marathon 7+ hours at the hospital with Sistwerp. So thankful to have had my knitting with me!!! And an extra hank of wool! I ran low on the first ball 3/4 the way through row 100. Using my handy knee swift 😉 I was able to get the second ball wound, and with the help of my waterbottle I was able to safely wet splice the two ends and keep knitting. (*Note: the knitting and remainder of ball 2 weighs 243g; The needle weighs about 9g so the combined weight of the wool and knitted fabric is roughly 235g  leaving me to guess the balls of wool are each 117.5g) Knee swift in action photo: 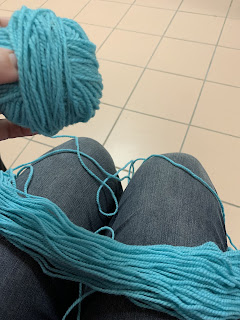 And now for one of the hood now that we've been home for about 2 hours: 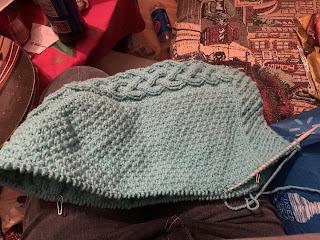 There's only 2 more increase rows (with 3 plain rows between them and 3 rows from the point I'm at now to the first one) left and then the hood is worked straight until it's time to decrease (sharply) to the number of sts needed to start working the body of the cloak. I have the straight section in my notes as 7"; that may change as I wasn't 100% sure how oversized I want the hood to be. I wanted it to drape but not be comical looking.
Here's an idea of the drape so far: 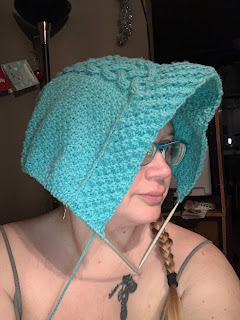 I'm thinking 7" is going to be way too much now. Maybe only 3-4" is a better idea? There will be more try-ons!! But first I must sleep 😴😴😴😴
May 10: I've finished the hood! Took a bit longer than expected but I have the decreases figured out, knit, and the first row of the cloak body done 😊 Photos! 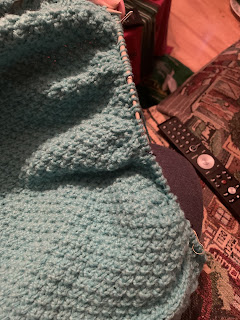 This one was taken while working the first row of the cloak's body. 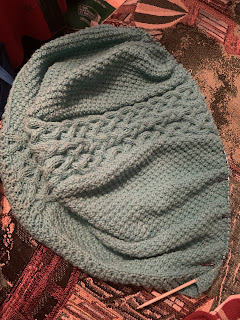 And this one is with the entire hood decrease/cloak body start row section (2 rows!) done. Whew! And all my markers are now in place to continue.
I should add I'm still on the second ball of wool; it's a lot smaller than before but I haven't had to splice in the third one yet.
May 11: Starting hank 3 (114g) on row 8 of the body; very close to the beginning of the row (less than 1/4 the way through it). Going so good 😊
May 17: Time for a few pics! How everything is looking together: 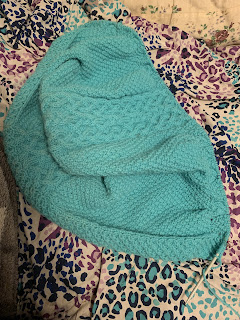 And looking a bit closer at what's done on the body: 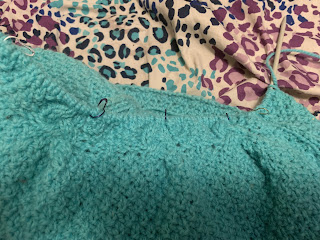 And a bit closer still: 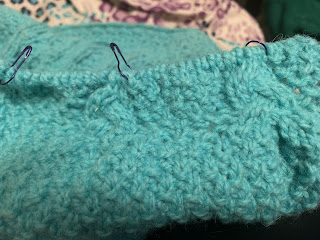